On our second full day in Phnom Penh we really wanted to do something to help the poor children.  The difficulty is that many of the “orphanages” are actually scams.  What is really sad is that orphanages are becoming tourist attractions and that means business opportunities.  Some ‘so called’ orphanages borrow poor children for the day to collect donations and then return them to their parents in the evening.  While others let the children live in terrible conditions while they keep the donations for themselves.  If we were going to donate we wanted to make sure it was going to a legitimate place.

We had learned about the garbage dump near Phnom Penh where many children live, work, and/or go to school.  Yes, that is correct, a garbage dump and yes, they even have a school there!  One person that we spoke with who organized donations for children of the dumps told us how it was also difficult for them to give them supplies.  One time they bought everyone rubber boots so they wouldn’t be barefoot walking through all of the rubbish at the dump, but the next time they came to the dump, none of the children were wearing their boots.  He asked them why and they responded that they didn’t want to get them dirty.  Huh?  Clearly, they chose to sell their boots instead of wearing them.  On another occasion they brought milk for all mothers with babies.  So on the next visit  all of the women were carrying babies!!  How difficult it can be just to help …

After talking to a few people who have been helping out the children in Cambodia and doing some research online we found Save Poor Children in Asia Organization (SCAO). 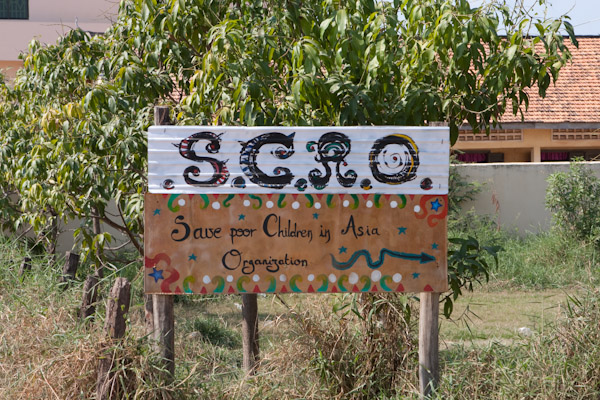 First we went by the Central Market to get school supplies and fruits and vegetables and then hired a tuk tuk driver to take us to the orphanage/school.  We were warmly welcomed by Mr. and Mrs. Samith, the founders, and Mr. Samith sat down to explain his vision for the organization to us.  He seems like a person who genuinely wants to help the poor and orphaned children and he’s not willing to sell out to anyone offering big money or land who would turn SCAO into a profit seeking business.

After our chat (during which George and I were melting from the heat), we headed over to watch one of the English language classes they offer.  SCAO houses and cares for around 13 orphans and also provides free English classes for poor children in the area.

The volunteers teaching the class had just started the day before, so they were figuring out their lesson plan as they went, but it was great to see that there are people who are willing to stay and volunteer there for a week or a month.  It’s also wonderful to see how eager some of the students are to learn.  Even though the class was mostly students around 9 years old, a couple of the teenage boys who live at SCAO were happy to participate.  Whenever the younger students didn’t know the answer they would raise their hands to pitch in.  It was great to see that they weren’t “too cool” to take part in the class.

This polite young man named Heng walked over to George before class started and began a conversation, with very well spoken English.

There are other ways you can help, such as eating at certain restaurants that give donations to underpriviledged children.  While you will be paying back home prices for meals, Friends Restaurant located at 215, Street 13  is a great example where they teach street kids how to cook, clean, wait tables, etc.  They also have associated projects to teach children many trades.  You can find more information from their website http://www.mithsamlanh.org.