WARNING: The contents of this post is NOT intended for children.  Some of the information and photos below may be found shocking and disturbing.  This content is included in order to provide further education regarding Cambodia’s history.

Background:  The Khmer Ruge controlled Cambodia in a reign of terror from 1975 to 1979.  The leader, Pol Pot, attempted to convert the country to an egalitarian communist society, without rich and poor classes, but instead with all citizens as subservient rice farmers, loyal to and unquestioning of their leader.  When the Khmer Rouge took power they untruthfully told the urban people in Phnom Penh that the US was about to bomb the city, and that they needed to evacuate immediately but would be able to return home in 2 or 3 days.  In reality, the Khmer Rouge were forcing the urban population out into the country side to become forced laborers, growing rice.  The rice production was supposed to be enough for exports, seed, and to feed the farmers.  Since the expected production was unrealistic, especially with many people forced to farm who had never farmed before, there was only sufficient amounts of rice for export, with almost nothing left over to feed the workers.  The strenuous labor and starvation killed many.  But even more shocking and deadly, was Pol Pot’s attempt to rid society of education and culture.  In a massive genocide against his own people, he ordered the killing of the educated and professionals, including the doctors, professors, and lawyers.  By the end of the Khmer Rouge’s rein of terror, 1/4 of the population (about 2 million) of Cambodia had been killed.  Thousands of the executions took place at the Killing Fields outside Phnom Penh, which was used as a mass graveyard.  The Khmer Rouge lost power in 1979 with the invasion of Vietnamese forces, aided by a Cambodian uprising.  However, into the 1990’s members of the Khmer Rouge continued to conduct surprise attacks.

Pol Pot died in 1998 under house arrest, having been tried for killing his right-hand-man and his wife, but never having been tried for his crimes against humanity.  From the locals that we spoke with, there seemed to be no word strong enough to describe their feelings toward Pol Pot.  Now that Pol Pot has died they feel justice will never be served.

On February 17th, 2009, the first trial of a senior level Khmer Rouge leader began.  Kaing Guek who supervised the Tuol Sleng torture center, as well as 4 other Khmer Rouge defendants are finally being tried, 30 years after their alleged crimes.

Holes in the skulls were rarely by bullets, since there was a shortage of ammunition and it was expensive.  Instead, puncture wounds were inflicted by various tools, such as clubs, sticks, farm equipment, etc. 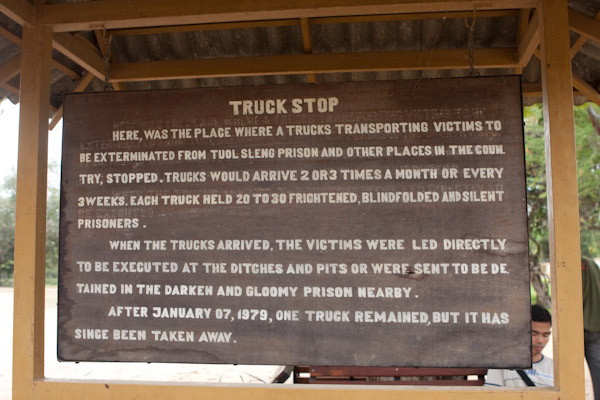 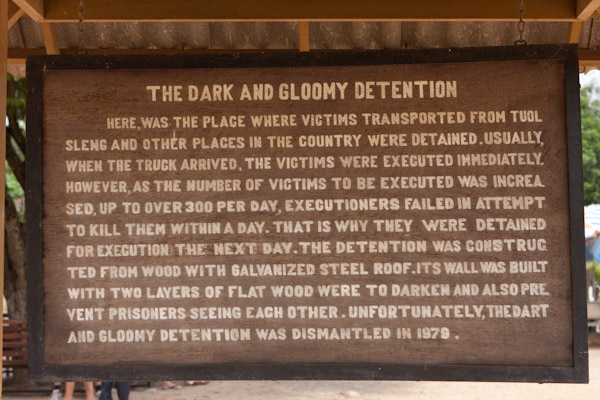 It was very sad and shocking to see human remains are still very visible throughout the grounds of the Killing Fields. 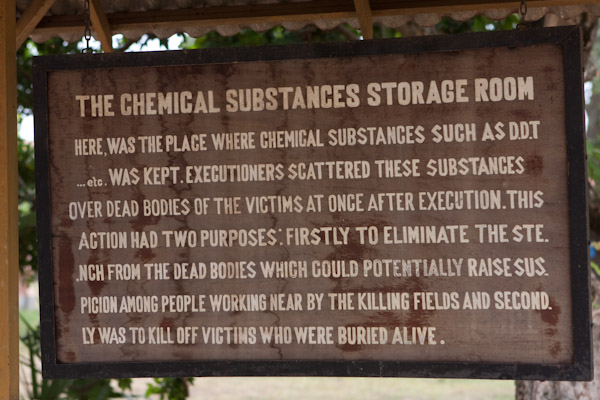 What made the visit to the killing fields even more unbearable were the children outside the fence begging for money or water.  It is terrible to see the current disparities in Cambodia between the rich and the poor.  Understanding Cambodia’s past helps explain why so many are in such a desperate situation today. 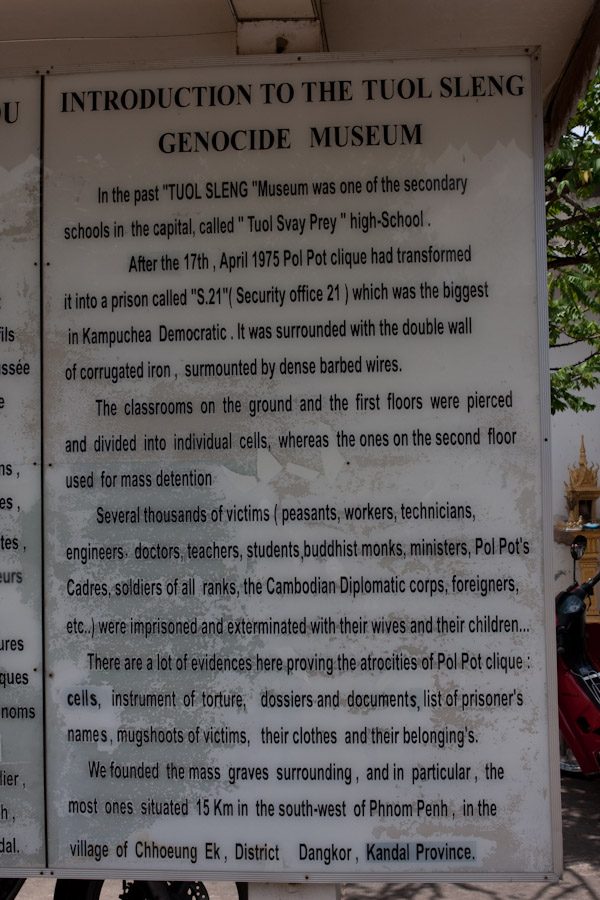 The last 14 victims were discovered in various stages of decomposition after the Khmer Rouge were defeated. 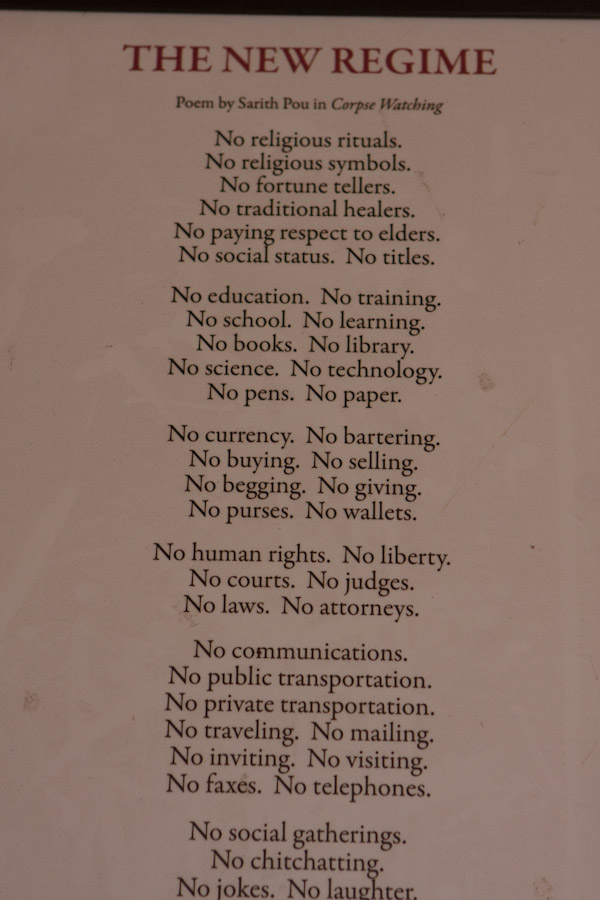 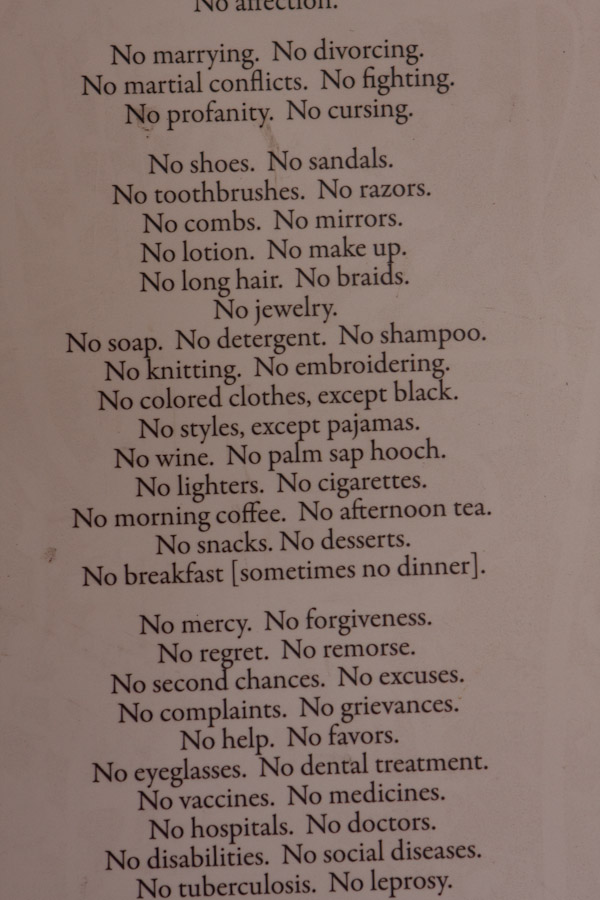 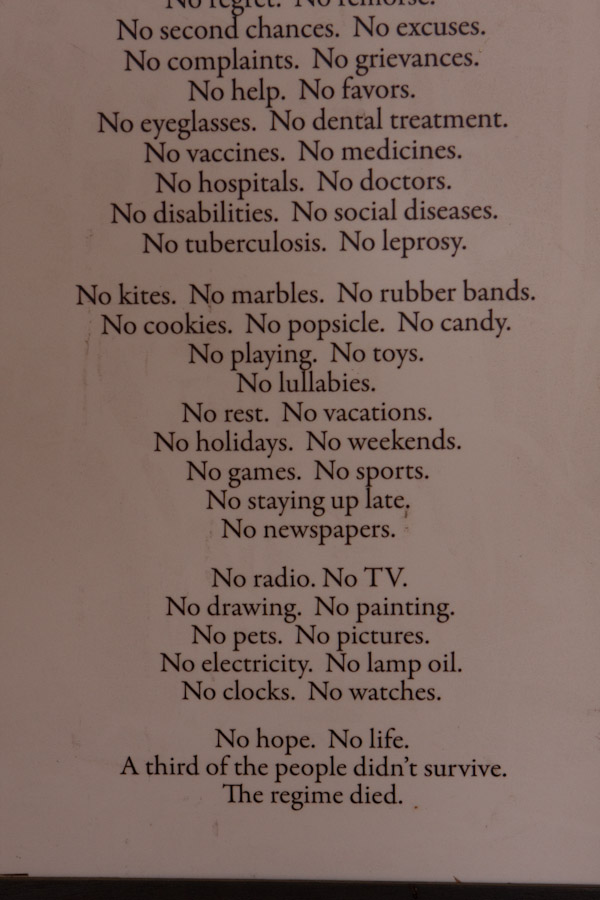 It is hard to believe that this happened only 30 years ago …  How and why did the international community let this happen?  Even worse, how did the United Nations allow the Khmer Rouge to be members until the early 1990s?

One of the locals who we spoke with told us that during the Pol Pot regime his entire family of six, was split up (common at the time).  He had two brothers and a sister and after the war there was no trace of one of his brothers and his sister.  His parents searched for a long time, but now believe that they faced the fate of so many others.

Today, Cambodia is a very young nation.  I had read that over 40% of the population is under the age of 14 and many are orphans and/or very poor and are forced to quit school so they can work to help support their family.  On the other end of the spectrum, Cambodia is progressing and many people are now rich and drive luxury cars.  The disparity is an obvious sign of corruption in the government, and perhaps, there will be another uprising of the people?  Let’s just hope it will be peaceful…

It was hard to enjoy the rest of the sites in Phnom Penh, after starting out with such a depressing morning.

Very grand indeed!  On par, or even greater than the Grand Palace in Thailand!

We also visited the National Museum, but since photography was prohibited there, we weren’t able to take any photos.

The last stop was Wat Phnom, which also required a $1 usd admission for foreigners, and really is not worth the visit.  Only go here if you are in need of a shade tree or want to see the local monkeys begging for food.