We arrived in Varanasi the morning of April 7th.  After finding a hotel room, which George has already written about, we walked along the ghats (steps along the Ganges River).  Perhaps it was the heat, lack of rest from the overnight train, or sensory overload, but I was not in a very good mood.  I had read and heard about Varanasi, which is a very spiritual place, but it just wasn’t what I had expected.  As we walked along the ghats there would be someone peeing on the steps a little ways up from where children were swimming in the river.  As George put it, “you couldn’t walk for more than 2 minutes without seeing someone urinating.”

We eventually reached Manikarnika Ghat, the main burning ghat.  We watched as a covered body was carried on a bamboo stretcher to the river, dipped in the purifying waters, piled with wood, and then cremated.  I had pictured it being more of a personalized ceremony, with family nearby, but there are workers whose jobs are to conduct the cremations, and there are multiple ones taking place at once.  We watched for a while, but the thought of it being a person in that burning wood pile, with a family, and a life behind them was a bit much for me, and I moved a bit away, where there was less smoke.  I ended up standing next to a chai-wallah (man who sells chai tea), and that seemed even more incongruous to me.  There I was at the sacred Ganges River standing next to a man stirring an open pot of chai, who was standing a few feet from a drain of gray water and trash running into the river, and a few more feet down were dead bodies burning on the river bank.  No chai for me, thank you.  It just seems to me that if the Ganges is such a sacred place, it should be kept clean.

Our Lonely Planet guide book explains that for water to be safe for bathing it should contain less than 500 faecal coliform bacteria per liter, but samples show this part of the Ganges has 1.5 million per liter!  In Varanasi alone there are 32 point sources of raw sewage entering the Ganges.  It may appear that the river gets contaminated from people bathing and the cremated bodies, but Professor Mishra’s studies show that only 5% of the river’s pollution is from direct uses.

Here is yet another example where I feel there should be better education about health and sanitation.  If people don’t realize that pouring raw sewage into the river and then swimming in it can make them sick, they should be taught.  But I always come back to the question of whether they just can’t afford to do better.  But it seems the government should provide proper sewage treatment and disposal and people should be made aware that certain of their behaviors pose health threats.

Our feet were soar, and we headed back to the room to get some sleep.  Once we got back to our room the power went out, so we hung out at the restaurant for a while, until the light in our room would work again.  Varanasi experiences many power outages and even though our hotel had back-up power it was only for certain uses, like lights in the restaurant area, but not for luxuries like internet.

We started out the next day, April 8th, with some shopping.  In the early evening we headed back to the ghats.  There was going to be a ceremony held at Dasaswamedh Ghat at 7pm, but we were an hour early, so we sat on the steps for a while.  Touts kept trying to sell us a boat ride, but we kept refusing, saying we wanted to sit on the steps and watch the ceremony.  Finally, about half an hour before the ceremony started the man who kept urging us to take his boat agreed to the price we wanted, 100 rupees for the two of us for one hour, instead of his offer of 100 rupees per person per hour.  We each bought a floating candle on the way to the boat to release in the river.

Our boat driver (paddler), who of course was not the man we negotiated with, was very slow.  We reached the burning ghat and paused a little bit before heading back towards where the ceremony was to be held.  Although we kept telling him we wanted to watch the ceremony he took his time slowly paddling back.  Even once we got back to the area where we had gotten on the boat and kept indicating that we wanted to go to the shore he kept us out in the river.  I think he was trying to keep us on the boat to watch the ceremony, so that we would have to pay for 2 hours, even though we had only agreed to 1 hour.  We finally demanded he take us to the bank and let us off right there.  As he took us ashore he started talking about how the man who owns the boat keeps most of the money and he only gets a small bit, trying to get a tip out of us.  When we landed I paid him the 100 rupees we had agreed to with the “boat man” and the driver looked aghast and said, “It’s 200 rupees.”  Nope!  We weren’t going to pay any more than we had agreed to.  We told him that 100 was what we had negotiated and walked off to watch the ceremony, which was winding down.

On the way to find a good vantage point I saw a “priest” putting bindi dots on a couple tourist’s foreheads, and it didn’t look like they paid anything.  So when he approached me, I let him put the red powder dot  on my forehead and say a blessing for long life for my family.  Then he held up his dish and said, “300 rupees.”  300!  We would only pay 100 for the boat ride, and this “priest” wanted 300 for a blessing?!?  We gave him 10 and walked away.  We got to watch the ending of the ceremony from right up close, but I didn’t enjoy it as much as I might have if everyone wasn’t always trying to rip us off!  George enjoyed the ceremony and took some photos and wanted to watch the other ceremony that was also wrapping up, but I was ready to go back to the room. 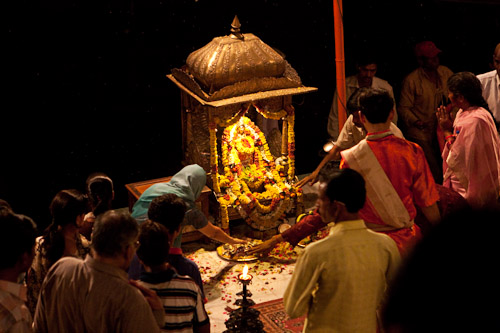 The next morning, April 9th we walked out to the ghats for a little while to take some photos, since we had been too drained the first day to take any.  This time I was in a much better mood and sang a little song to myself about the “cow pies and pee cakes” that were baking in the sun along the steps.

After taking some photos we headed toward the train station to visit one more shop that was recommended in the guide book.  Then we had a delicious and cheap meal at one of the shabby restaurants directly across the street from the train station.  Unfortunately, all the dirt and smoke in the air was getting to me and I had a really bad soar throat.  I was only able to eat dhal (lentil soup), but George enjoyed the thali (meal set).  It was good authentic India food.  Since we had run out of things to do, we headed to the train station to wait for our train to Kolkata.