We changed our proposed itinerary a bit, and skipped the hassle of taking a train north to Sukothai and then Chiang Mai.  Instead, we flew from Phuket to Bangkok and then from Bangkok to Chiang Mai the same day.

On our first day in Chiang Mai we headed out of the city to neighboring Bo Sang Village (I would call it a town, more than a village).  I’d read in the magazine on our flight from Phuket that January 18 was the last day of the umbrella festival in Bo Sang, so we made it just in time.  The driver from our hotel dropped us off in Bo Sang, and later we caught a white sawgthaew back into Chiang Mai City. 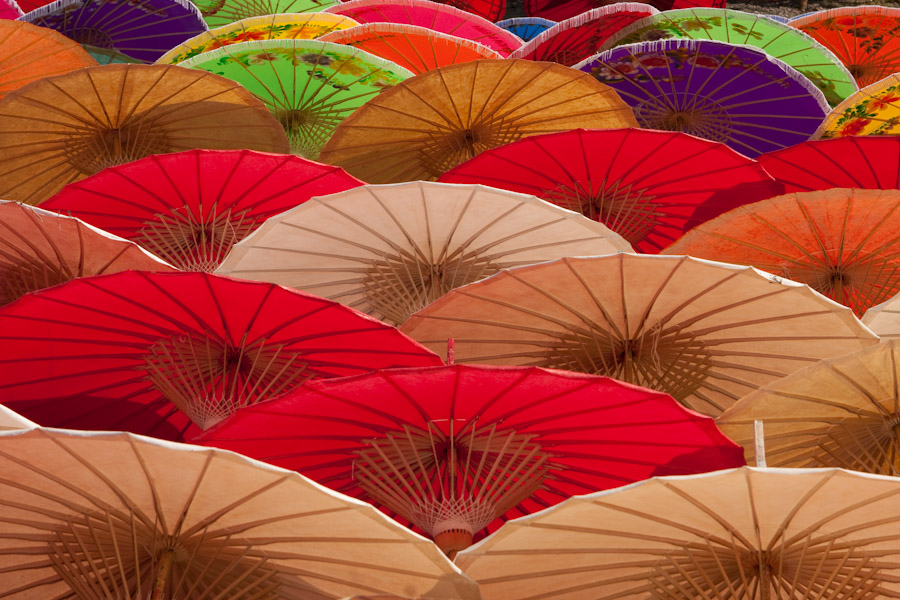 Bo Sang was quite a photogenic place, full of handicraft shops, and since it was the last day of the festival most of the stores were decorated with parisols.  There was an announcer broadcast all down the street letting us know what was going on for the day.  There was a little wood carving competition and a parade of women on bicycles with parasols.  We took lots of photos, so this is a long post.  I’d definitely recommend going to Bo Sang if you like seeing the process of how handicrafts are made, but it might not be quite as decorated if the festival isn’t taking place.  Helpful Hint:  Even though the Lonely Planet guide says that San Kamphaeng Village 5km further down the road from Bo Sang has traditional cotton and silk weaving, that is no longer true.  It’s now just a regular town, and probably not worth visiting.  However, if you have your own vehicle or driver you could stop all along Route 1006 (San Kamphaeng Rd) at silver, wood carving, silk, ceramic, and other handicraft shops.  The white sawngthaews also run along this route, but it’d be hard to know where to stop, since it’s difficult to see out of the back of a sawngthaew, and then you’d have to wait for another to come along to get to your next stop.

As soon as we entered Bo Sang, on the right hand side of the street, we saw the Umbrella Making Centre and ventured in.  There is a large shop and behind it a courtyard area with workers making parasols.  Each step is separated out and labeled with a sign.

The last steps are to paint the parasols and add any fringe and frills.  The parasols are set out in a grassy area in the middle of the courtyard to dry.

We were excited to find that the artists who paint the parasols at the Umbrella Center not only paint parasols, but will also paint your clothing, cell phone, or other item for you.  We saw people getting their jeans painted, and I decided to join the fun.  Each artist had a panel with sample designs and a small design costs a minimun of 50 baht and a large design costs a minimum of 100 baht (you choose the price you pay).

Stores, restaurants, and street entrances all down the main street were elaborately decorated for the festival.

We still had half a day left when we returned to Chaing Mai City, so we set off to see some temples.  We had gotten off the white sawngthaew (15 baht/ person) at Warorot market, and from there we hired a red local sawngthaew to take us to Wat Phra Singh (10 baht/ person).