Skip to content
We arrived in Hanoi, Vietnam on January 29, 2009.  After reading about hotel scams where rip-off hotels steal reputable hotels name’s and then overcharge customers and force them to buy tours, we made sure to arrange for our hotel (The Ritz Hotel) to pick us up at the airport.  We didn’t want to deal with a taxi driver taking us to a fake version of the hotel to earn a commission.  We’re quite happy with the Ritz Hotel.  It’s located right across the street (well, down a little alley off the street) from Hoan Kiem Lake, in the Old Quarter of Hanoi.  It has ADSL in the room (not WiFi, but that’s okay) and 3 computers downstairs with free internet.  The room is narrow, but nicely furnished, with a desk, TV, heater, mini fridge, and a separate bathtub in the bathroom.  I’d read reviews about places that just had the shower head between the sink and toilet with no room to shower, and certainly didn’t want that.  The staff have been friendly and helpful and the restaurant with included breakfast serves good food.
The drive from the airport to the hotel was our first introduction to Vietnam.  The road was just one lane going each direction, with cars on the left side of the lane and tons of motor bikes squeezed into the right side of the lane, and the cars were non-stop honking at the motorbikes and other cars to get out of their way.  Our driver kept trying to speed up and then had to break suddenly, and on one occasion even ran into the car in front of him!  But it seemed to be normal for them and after getting out and looking at the car for damage, with passing cars honking like crazy, he got back in and kept driving.  Before the city we passed by a long strech of pleasant fields.  Entering the city we saw many tightly packed tall, narrow, colorful buildings, similar to those in San Francisco.  The ride took quite a while, and we realized we were in a BIG city, nothing like the city/towns of Laos.  Once we were almost at the hotel the road to get right up to the hotel was blocked, so the driver called a bell hop from the hotel to come walk us with our bags.  We hoped we were being taken to the correct hotel.  Just as George said, “maybe the road is closed for a parade,” a line of people in costumes carrying a wooden structure full of rolls of fabric came parading down the street.  One of the ladies ran over to George and put a silk scarf around his neck.  George liked Hanoi already ;).  We never figured out exactly what the parade was about, but it probably had something to do with Tet (Vietnamese New Year).
After checking in we headed out for a walk around Hoan Kiem Lake (Lake of the Returned Sword).  It’s so pretty at night, especially when it’s all lit up!  I bought some sugar/butter popcorn for 10,000 dong (57 cents) as we strolled around the lake.  The conversion here of 17,000 dong to US $1 is even harder for us to get our heads around.
Here are some photos of Hoan Kiem Lake at night: 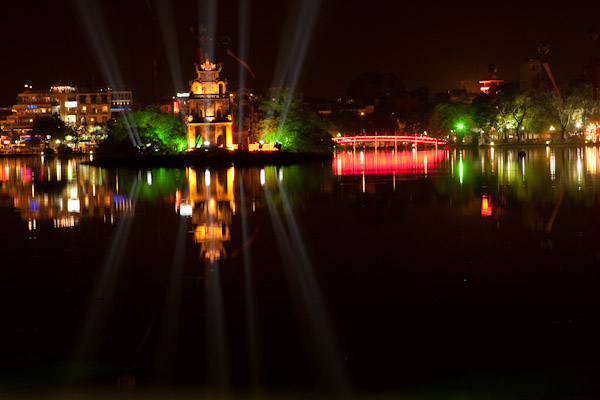 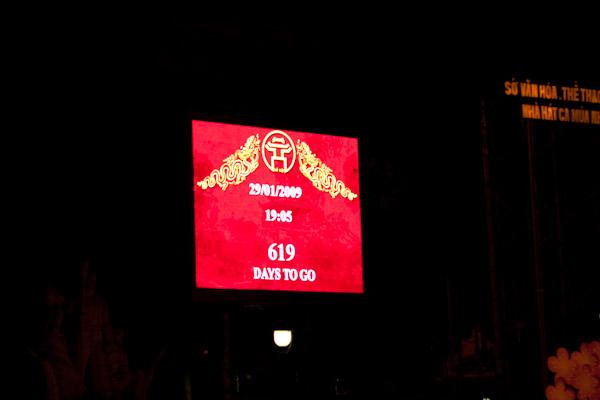